Forgetting Emilie Pine’s Notes to Self and Maggie O Farrell’s I Am. I Am. I Am. by mistake on the hall table at home, I had to adjust the plan for this class on my way in to Trinity.

We started, as planned, with the opening scene from the film adaptation of Carlo Levi’s non-fiction Christ stopped at Eboli which shows the Levi figure, aged, (“closed off from this world”) contemplating his portrait paintings of the peasants he treated and knew when he was banished to southern Italy for criticising Mussolini’s government. In the clip, we see close ups of the painted faces and hear the voiceover saying “I’ve been unable to keep the promise I made to those peasants upon leaving: that I’d return to them.”

Moving to another poor community in a rural location, namely, Gloucestershire – I then told them about John Berger’s A Fortunate Man, and showed them some of Jean Mohr’s photographs, pointing out that the commission that led to Fionn McCann’s ‘General Practice’ photographs, which hang in the halls around the Biosciences building, was inspired by A Fortunate Man. We read together the short scene early in the book in which a young woman visits the doctor, John Sassall, complaining about nothing in particular (‘You just feel weepy?’). The episode is mostly dialogue, but we discussed Berger’s observation of the patient: that ‘She is nubile in everything except her education and her chances.’ We compared that to Levi’s painterly observations of the peasants of southern Italy. We also analysed the particularly personal level of care that was shown in the consultation, how it reached into the patient’s circumstances, going way beyond physical and even narrowly defined mental health concerns.

We discussed at some length the last few lines of the vignette, another authorial intervention: “After she had turned the corner, he [Sassall] continued to stare at the stone walls on either side of the lane. Once they were dry walls. Now their stones were cemented together.” We identified the poetic nature of it and the possible metaphorical comment it represents in relation to the lives of the local people becoming more restricted.

To stand in for the more negative experiences of doctors that are a feature of some of the encounters in Pine’s Notes and O Farrell’s I Am.., I simply showed them & read from the front page of the Irish Times from 13 September 2018 when the Scally Report was published. 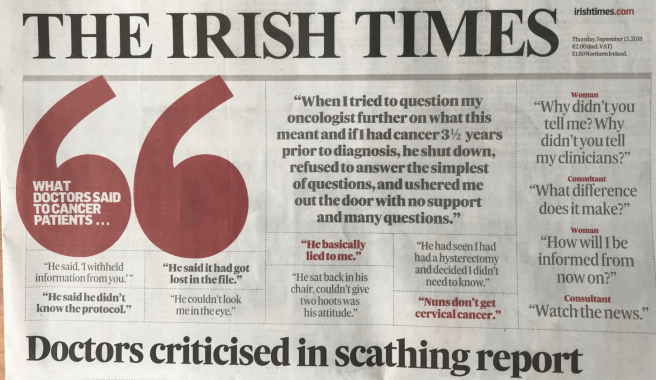 We then read Kim Caldwell’s personal essay, ‘Life Lessons’ (from CUP’s ‘Palliative & Supportive Care’), about her recollections of dealing with various patients close to or at the time of their death. We discussed why she might have chosen to address those people in the second person singular; and some other aspects of the style of writing, the structuring of the pieces, and the literary nature of some of the writing. We noted how much detail she was able to recall about the lives of these patients, details which she had picked up from spending time with them and consciously listening to them, details which she still recalls and which she consciously shares with the reader, as if challenging the reader to sit with the patient as well and get to know them. We discussed her reasons for going into so much detail, and for wanting to share the accounts with others. (Prompted by one possible reading and the occasional ‘commodification’ of doctors’ experiences that one encounters, we discussed the possibility of there being an element of flexing or trumpeting about such accounts, but the majority of the class felt that this would be an unfair reading to the author in this case whose genuine nature came across very clearly in how much she obviously cared about these people, wanted to remember them as people – not just patients, and how she pointed to her shortcomings and the system’s pressures that prevented this kind of interaction being the norm.) We discussed the pressures on medics to concern themselves with much more than just the science of health, the symptoms, the diagnoses, the treatments. It was pointed out how helpful it was to get this perspective on the patient-doctor relationship.

Heather came to Brooklyn after high school, when she was nineteen, more than thirty years ago. She had planned to go to college to study English literature and become a teacher—she loved poetry, she loved T. S. Eliot, she loved C. S. Lewis—but when she prayed about this she got a sense that God was telling her to go into nursing instead. She was reading the Bible, 1 Thessalonians, and came across the verse “But we were gentle among you, even as a nurse cherisheth her children.” She said to God, Nursing? Lord, I never really thought of nursing. But she discovered that it suited her. Normally, a graduating nurse went into medical-surgical work—that was where the prestige, the difficulty, and the excitement were—but she went instead into home care. She wanted to care for her patients in a personal way, rather than racing from one task to another, one limb to the next—inserting an I.V. here, drawing blood there, scarcely noticing whose vein she was puncturing or whose arm she was holding…

People react differently to a death. Some cry, some are calm. Some are frightened to be left alone with a body. Some fear that the body may come back to life. Wives sometimes throw themselves on the body, weeping and grasping it, especially when the couple have been married forty, fifty, sixty years. “The Bible says, And two shall become one,” Heather says. “It’s a wrenching that happens, a tearing, like a garment that’s being pulled apart.” But fairly often a former spouse is taking care of the patient, because there is no one else to do it, and that person may not feel too much.

When the time seems right, Heather begins the postmortem rituals. She shines a flashlight into the patient’s eyes to see that the pupils no longer constrict, and, if they do not, she closes the eyelids. She checks the pulse at the wrist and neck. She listens to the chest, and looks at the hands to see if they have changed color. She asks the family if there are people they need to call—other relatives, a priest, the funeral home—and if they aren’t ready to do it she offers to do it for them. She phones the hospice doctor to confirm the time of death, and the doctor writes up the death certificate. It is illegal to transfer medications from one patient to another, so she goes to the patient’s fridge and retrieves any leftover drugs and destroys them, with bleach, or coffee, or dirt.