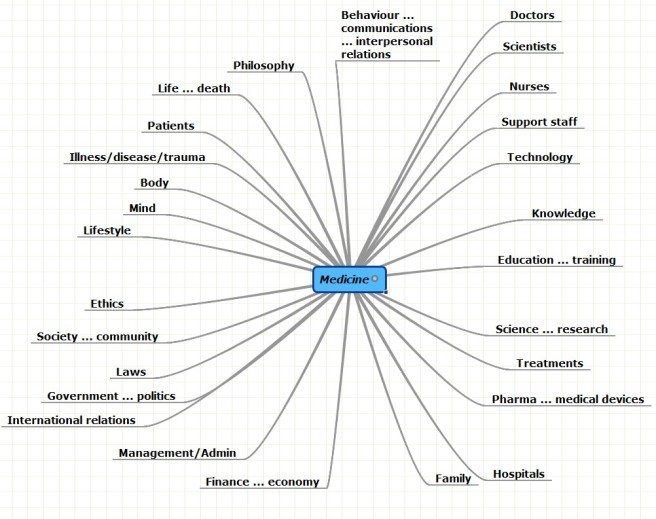 Accepting that we would not be able to cover all these apsects of medicine in course of a 6-week module, we then read some letters to the Irish Times about the late Maurice Nelligan (here >>>) as an indication of how one (exceptional) doctor’s life can reflect so much of that fuller picture of medicine-in-the-world; while also realising that most doctors will only ever be confronted with most of the issues in passing.

Focussing in a particular aspect of the education/training of doctors, we then read some extracts from a few highly rhetorical Irish Times columns – by a columnist (now with Indo) who shall remain nameless – about the impact of medical training on students: “Possibly the young hospital doctors deserve everything they get. After all, it’s the life that they chose for themselves. Nobody made them do it, and most of them must have had a pretty shrewd idea of what lay ahead from the very first day in medical school, the greatest oxymoron of them all. For medicine and school are antithetical terms.

School for the rest of us means broadening our horizons; but the study required to be a doctor is the precise opposite of that. In what it does your brain, medicine comes a narrow second to placing your head in a piledriver. The latter is, to be sure, a little quicker and somewhat more Hammer-horrorish in special effects, but the net result is the same. Encephalectomy.

Why does the medical profession do this to young graduates? Why are they forced to know the christian names of every single cell of the body? Why do they spend 23 hours a day forcefeeding their brains with vast quantities of useless information which they will never need again? If geese were treated there would be uproar: so why is it acceptable to turn the bright young brains of medical students into cerebral foie gras?” ….

“The very first taks of medical school is the conversion of the brain from a vital ratiocinative organ for analytical thought and speculation into a machine for storing facts – a cerebral shoebox containing a vast anatomical index … and also, in an unswept and unvisited corner, a small, withering organ called common humanity.

This is not the fault of the students. It is almost impossible for the spirit of ordinary sensitivity, of optimistic enquiry, of normal ignorant speculation working its way to enlightened conclusion, to survive the Gradgrindery of medical training. Medical students probably work five or ten times harder than arts students; and correspondingly, they discover five or ten times less about human nature. That discovery is made in casual college discourse, in unstructured debate, in wide and varied and undisciplined reading. It is the very purposelessness of the liberal arts which give [sic] them purpose.”

After the break, we moved on to looking at what literature is & where it might fit into a medical student’s & doctor’s life. I pointed out that I was not limiting the course to fiction but including poetry, scripts, memoir, essay and journalism; only looking for fresh & interesting perspectives being offered on any aspect of medicine.

Wanting to take an extreme perspective on what use literature might have in the life of a medic, I read an extract from Rita Charon’s Narrative Medicine: 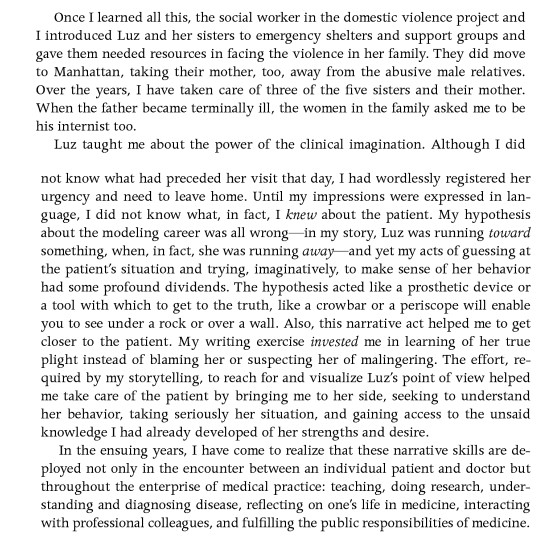 This led to a discussion on how far one could go in treating a patient (and in taking a history, in particular) using one’s imagination. The thesis that “clinical imagination” should be used by doctors was seen as perhaps going too far, in that mistakes could be made; the antithesis that it’s all about facts misses out on the fact (!) that people tell stuff about themselves in stories that don’t always give up their facts neatly. The sythesis emphasised that a sensitivity to how narratives work, how stories are told, might help a doctor get to and unearth the important facts in patient’s situation to aid a sound diagnosis and treatment.

Finally, I quickly mentioned some other benefits of reading outside the course:

We discussed the next session’s text: William Carlos Williams’ stories.